He lived with his mother (Susan Evans), father (Wallace Evans) and little sister Connie (played by Quinn Culkin). His little brother Richard Evans drowned in a bathtub, which is later caused by him, as he killed his own brother out of jealousy due to all the attention the little tyke received.

His cousin Mark Evans (played by Elijah Woods) came for a visit while his dad went on a business trip in Tokyo after his mother's death, and befriended him, only to witness disturbing signs of violent behaviors, such as causing a car accident by shoving a dummy named Mr. HIghway onto oncoming traffic, killing a dog with a homemade weapon, kicking him at the dinner table, and throwing his sister Connie onto the thin ice while out skating, trying to kill her.

Mark realizes that his cousin Henry is truly a violent monster, and tries to warn everyone, but no one believes him.

One day, his mother Susan finds Richard's rubber ducky in the shed and confronts her son. Henry asks his mother where she found it. Susan is beginning to realize that her son has had something to do with Richard's death.

While going for a walk in the woods with Henry, his mother asks him about the day his brother Richard drowned in the bathtub. Henry tells her that he was "downstairs playing when this happened".

Henry with his mother Susan 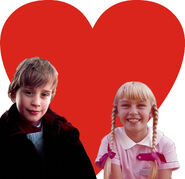 With Rhoda Penmark
Add a photo to this gallery

Retrieved from "https://parody.fandom.com/wiki/Henry_Evans?oldid=1951765"
Community content is available under CC-BY-SA unless otherwise noted.