The Parody Wiki
Register
Don't have an account?
Sign In
Advertisement
in: Thomas & Friends Characters, Male Characters, Heroes,
and 97 more

Henry is a green mixed-traffic tender engine and the wise, friendly and big green engine in Thomas the Tank Engine and Friends.  He was originally a failed prototype engine, and needed special Welsh coal to operate properly. Following his accident when pulling The Flying Kipper, Henry underwent an extensive rebuild, giving him a new shape.

Henry played Butler in Thomas and the Ghostly Adventures

He is a Circus Engine

Henry plays Grandpa Longeck in The Land Before Time (JamesimusPrime2798)

Henry plays Baloo the Bear in The Jungle Book (JamesimusPrime2798)

Henry plays Link in The Legend Of Natalie

He is a Human

Henry in Calling All Engines! 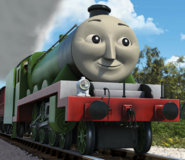 Henry in The Great Discovery 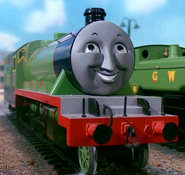 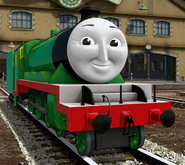 Henry Dressed Up as Link 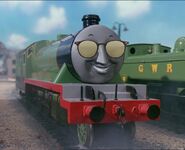