The Parody Wiki
Register
Don't have an account?
Sign In
Advertisement
in: Characters, Wiggle Friends, Wiggly Topics,
and 29 more

Henry the Octopus is a fun-loving octopus who lives under the sea and likes to make music with his Underwater Big Band. He also likes to dance and spin around. He is the main protagonist and star of his own segment in the first series, and a major supporting character in the rest of the TV seasons and all of The Wiggles videos (except The Wiggles Go Bananas!, where he did not appear). His role has been more minor in modern seasons.

Henry likes to sing and to dance with his eight legs. He is said to have a bubbly personality and loves a good joke.

According to Anthony in Everybody Clap! Everybody Sing!, Henry was named after The Cockroaches drummer Tony Henry.

Even though at many times he is voiced by Paul Paddick after 2006, he is still occasionally voiced by Jeff.

He was introduced in 1992, appearing on the song Henry the Octopus from Here Comes a Song.

Henry the Octopus Through the Years 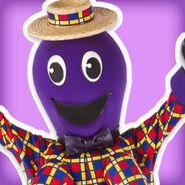 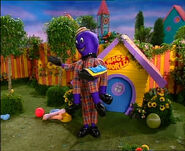