The Parody Wiki
Register
Don't have an account?
Sign In
Advertisement
in: Characters, Animals, European Animals,
and 30 more

The Hereford is a British breed of beef cattle that originated in the county of Herefordshire, in the West Midlands of England. It has spread to many countries – there are more than five million purebred Hereford cattle in over fifty nations worldwide. The breed was first exported from Britain in 1817, initially to Kentucky. It spread across the United States and Canada, through Mexico, to the great beef-raising countries of South America. Today Herefords dominate from Australasia to the Russian steppes, including Israel, Japan, continental Europe and Scandinavia, temperate parts of Australia, Canada, the United States, Kazakhstan and Russia, the center and east of Argentina, Uruguay, Chile, and New Zealand, where they make up the largest proportion of registered cattle. They are found all over Brazil and in some Southern African countries, notably South Africa, Zambia, and Zimbabwe. Their original popularity among ranchers of the American Southwest testified to the hardiness of a breed originating in cool, moist Britain, but shown to thrive in harsher climates on nearly every continent. The World Hereford Council, is based in Britain. There are currently 20 Hereford societies in 17 member-countries and a further eight in 10 non-member countries. In the United States, the official Hereford organization and breed registry is the American Hereford Association, the second-largest society of its kind in the country. 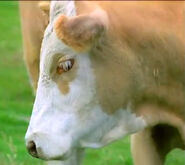