The Parody Wiki
Register
Don't have an account?
Sign In
Advertisement
in: Characters, Animals, Domestic Animals,
and 15 more

Highland cattle are a Scottish cattle breed. They have long horns and long wavy coats that are coloured black, brindle, red, yellow, white, silver (looks white but with a black nose) or dun, and they are raised primarily for their meat. They originated in the Highlands and Western Isles of Scotland and were first mentioned in the 6th century AD. The first herd book described two distinct types of Highland cattle but, due to crossbreeding between the two, only one type now exists and is registered. They have since been exported worldwide. They are a hardy breed due to their native environment, the Highlands of Scotland. This results in long hair, giving the breed its ability to overwinter. Bulls can weigh up to 800 kilograms (1,800 pounds) and cows up to 500 kilograms (1,100 pounds). Their milk generally has a very high butterfatcontent, and their meat, regarded as of the highest quality, is gaining mainstream acceptance as it is lower in cholesterolthan other varieties of beef. 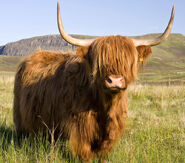 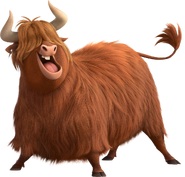 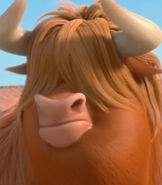