The Parody Wiki
Register
Don't have an account?
Sign In
Advertisement
in: Characters, Animals, Asian Animals,
and 29 more

The Himalayan tahr (Hemitragus jemlahicus) is a relative of the wild goat and is specially adapted to life on the rugged mountain slopes of the Himalayas, extending from the montane to alpine zones. George Schaller (1977) describes tahr as “… the quintessential goat…” because it selects the most inaccessible terrain in which to live . It has a dense, reddish to dark brown woolly coat with a thick undercoat, keeping it warm in the winter. In the spring, as temperatures rise, it loses much of its coat, and becomes lighter in color. The hooves are also well adapted, making tahr excellent climbers with flexible, rubbery cores allowing them to grip smooth rocks, and hard, sharp keratin rims enabling them to lodge their hooves into small footholds. The head is proportionally small, with large eyes, and small pointed ears. Both the males and the females have horns, reaching a maximum size of 46 centimeters, though the females’ horns are smaller in size. The horns of the Himalayan tahr curve backwards and slightly inwards towards the body, which prevents serious injury in head butting battles between males during the mating season. The young look very similar to the adults in shape but their coat is uniformly brown and their legs black. Adult males are easily distinguished by their pronounced ruff and mane. 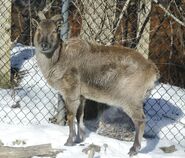 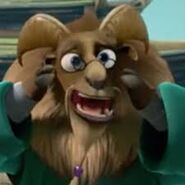 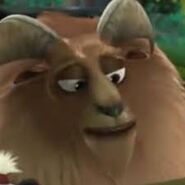