The Parody Wiki
Register
Don't have an account?
Sign In
Advertisement
in: Characters, Animals, Asian Animals,
and 3 more

The Himalayan wolf (Canis himalayensis) is an evolutionary lineage of the gray wolf distinguished from others by its mitochondrial DNA haplotype, which is basal to those of all extant subspecies of Canis lupus. The taxonomic status of this wolf lineage is in dispute. It has been suggested by several biologists in India for recognition as a critically endangered species of canid. Although the Indian government added the Himalayan wolf to its endangered species list in 1998, it still lacks legal protection in Tibet. 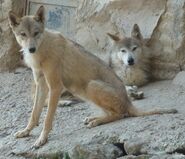