Hinata Uzumaki (うずまきヒナタ, Uzumaki Hinata, née Hyūga (日向)) is a kunoichi of Konohagakure. She lost her position as heiress of the Hyūga clan due to her meek disposition making her unsuited for the responsibilities of leading the clan. Nonetheless, Hinata persevered and from her observation of Naruto Uzumaki especially, Hinata found an example to follow. Through her membership with Team 8, she sought to become strong enough to change herself, if even a little at a time. A few years after the Fourth Shinobi World War, Hinata joined the Uzumaki clan after marrying Naruto.

She played Darla in Finding Gumball and Darwin

She Played Dana Tan In Batman Beyond (Chris1701 Style)

she is Terry mcginnis girlfriend

She Played Jasmine In Narutoladdin

She Played Himeko Nayotake In Sailor May S The Movie 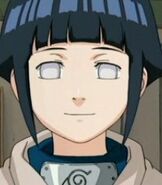 Young Wish Hinata.webp
Add a photo to this gallery
Retrieved from "https://parody.fandom.com/wiki/Hinata?oldid=2208997"
Community content is available under CC-BY-SA unless otherwise noted.