The Parody Wiki
Register
Don't have an account?
Sign In
Advertisement
in: Characters, Animals, South American Animals,
and 62 more

An adult hoatzin (Opisthocomus hoazin) is approximately 24 to 26 inches in length. Hoatzins have blue skin covering their faces and their eyes are red. The outer feathers are primarily chestnut-brown and the long tail is bronze-green and ends in a white band. The heads of Hoatzins are topped with a crest of reddish-brown feathers. The young are born without feathers but develop a layer of black down shortly after birth. A distinguishing feature of young Hoatzins are the pair of functional wing claws which are found on the ends of their wings on the first and second fingers. This feature is lost when the bird matures into an adult. 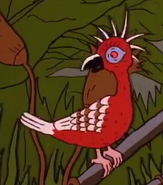 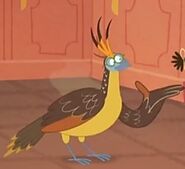