Hogarth Hughes is a main character from The Iron Giant.

Hogarth plays one of Karen's Friends in Top Cat (a.k.a., Frosty the Snowman

He is a knight.

He is a young street rat. 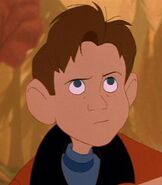 Add a photo to this gallery
Retrieved from "https://parody.fandom.com/wiki/Hogarth_Hughes?oldid=2040602"
Community content is available under CC-BY-SA unless otherwise noted.