The Parody Wiki
Register
Don't have an account?
Sign In
Advertisement
in: Females, Female Characters, Characters,
and 31 more

Holley Shiftwell is a secret agent based in Tokyo, Japan, who assists Finn McMissile in his missions and is also Mater's girlfriend.

She is voiced by Emily Mortimer who also voiced Sophie Hatter in Howl's Moving Castle. In the Japanese dub from the movie, she is voiced by Romi Park.

In Cars 2, Holley Shiftwell is a beautiful young British desk agent turned spy-in-training working in Tokyo who is sent in the World Grand Prix opening ceremony to exchange importants informations with Finn McMissile. She quickly becomes a field operative as Finn sent her to meet an other spy named Rod Redline in the bathroom. However, the latter is attacked by two lemons, Grem and Acer, and is forced to deliver a photograph to Mater. When Holley meets this one, he falls in love with her and he thinks they have a date. At the end at the movie, she tells everyone she is Mater's girlfriend and says to him that he still owes her a first date.

Like many spies, Holley is very kind and friendly. She is very good with technology, as shown when she uses an onboard computer to check on anything important, along with other gadgets that allow her to progress. She can be serious and motivated, but also sometimes naïve, such as when Finn reminded her about the saying that a spy will get whatever they find and try to escape before they can be found out when she was confused about why Mater could not tell from the photo of the lemons' mastermind. She also has uncompromising loyalty, especially towards Mater and Finn.

Holley is also very intelligent, telling by the fact that she was able to film the lemons driving through Porto Corsa by reprogramming the town's red traffic lights to scan them recognizably, as well as when she put a picture of Mater onto a screen showing the filming of the lemons so to give an idea of Mater going into the lemons' meeting in disguise.

Holley has a high resemblance to a Jaguar XJR-15. According to the Meet the Cars book, she is also a 2008 MT-R Mark II. Her license plate reads "HS1201", which has her initials as well as a reference to the birthday of her voice actress Emily Mortimer (December 1).

She is painted magenta-purple and has chrome rims and decals and jade green eyes. Soon at the end of Cars 2, she receives a dent on her left side after helping Mater defeat a couple of lemons. However, the dent is absent in the video games that follow the film, despite Holley claiming that she will keep it.

Additionally, she has several gadgets and weapons equipped in her front wheels: 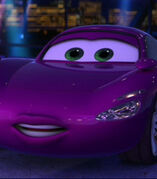 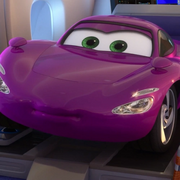 Holley getting ready to fly

Holley pointing her guns while flying

Holley as a diecast toy

Holley Shiftwell as a human

Holley on the moon