A spoof of Toon Fortress 2. 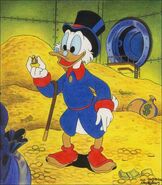 New Brian: POW! You are dead!

Homer Simpson: I am dead!

New Brian: Chuckling, while Villager is doing the conga towards the scene (New Brian says aw, shucks” as Villager gets close.)

Villager: Why is Homer dead?!

Homer Simpson: I think it was-

New Brian and Villager: Shhh, you are dead!

Bender: What's up, you wankers?! Who’s up for a- AH! What the- bloody hell just happened?!

Villager: So, did you see the murderer?

Villager: Slams hand on desk I will find him, I will capture him, and no one will ever die again!

Scrooge McDuck: That Homer is dead!

Scrooge McDuck: Who killed him?!

Scrooge McDuck: I will find clues!

(Scrooge searches through pile of stuff while sniffing)

Scrooge McDuck: What's that? Grabs gun A weapon?! That thing is why Homer is dead!

Nurse Joy: (From far away) Incoming!

(Ambulance crashes Scrooge into a building wall, killing him.)

(Heavenly music sounds while the light focuses on Homer)

Nurse Joy: In my medical opinion, that Homer is dead!

Nurse Joy: My professional opinion? Slams hands on desk then turns to the right (Intense background comes in) Homer was killed!

Nurse Joy: I don’t think it’s anything to worry about.

(Spongebob entering while doing the conga in the background)

SpongeBob Squarepants: Look at this! The freaking Homer is dead! Pause What do you think of that? Pause Ahm…

(Car drives off and crashing noise is heard)

Villager: Ok, let’s get back to the point.

Homer Simpson: Poking at his dead body I think Homer is dead.

Nurse Joy: Turns around and notices dead SpongeBob in burning car Spongebob! I will heal you- Car explodes and camera goes back to Homer

Donkey: Slurp Slurp It was me!

Donkey: Yes! Bottle of Scrumpy slides up Donkey’s body and Donkey eats the bottle I did it like this: Takes out a revolver and shoots Bender in chest Boom! Donkey flies off from force of revolver blast

Donkey: Slurp Slurp Burp It was… yo-... Burp Points at New Brian Him!

New Brian: Shocked How did you know?!

Donkey: I didn’t. Burps That was a joke too.

New Brian: Manic laughter That’s right! It was me!

Homer Simpson: No u, POW! Haha.

Homer Simpson: You are dead! Not big surprise.

Villager: Well that was idiotic. Off to hang myself! Villager doing flip on noose Watch and lea- Choking noises

Homer Simpson: I am alive! Is nice. Yes, this is stupid.