The Parody Wiki
Register
Don't have an account?
Sign In
Advertisement
in: Characters, Animals, Ocean Animals,
and 54 more

The horseshoe crab (Limulus polyphemus) is a ‘living fossil’: forms almost identical to this species were present during the Triassic period 230 million years ago, and similar species were present in the Devonian, a staggering 400 million years ago. Despite their common name, horseshoe crabs are not crabs but are related to arachnids (spiders, scorpions, ticks and mites), and are the closest living relatives of the now extinct trilobites. Horseshoe crabs have three main parts to the body: the head region, known as the ‘prosoma’, the abdominal region or ‘opisthosoma’ and the spine-like tail or ‘telson’. It is the tail that earns this order its name Xiphosura, which derives from the Greek for ‘sword tail’. The sexes are similar in appearance, but female horseshoe crabs are much larger than males. The carapace is shaped like a horseshoe, and is greenish grey to dark brown in colour. A wide range of marine species become attached to the carapace, including algae, flat worms, molluscs, barnacles and bryozoans, and horseshoe crabs have been described as ‘living museums’ due to the number of organisms that they can support. On the underside of the prosoma there are six paired appendages, the first of which (the chelicera) are used to pass food into the mouth. The second pair, the pedipalps, are used as walking legs; in males they are tipped with ‘claspers’ which are used during mating to hold onto the female’s carapace. The remaining four pairs of appendages are the ‘pusher legs’, also used in locomotion. The opisthosoma bears a further six pairs of appendages; the first pair houses the genital pores, while the remaining five pairs are modified into flattened plates, known as book gills, that are used in ‘breathing’. The horseshoe crab has a compound eye on each side of the prosoma, five eyes on the top of the carapace, and two eyes on the underside, close to the mouth, making a total of nine eyes. In addition, the tail bears a series of light-sensing organs along its length. A further unique and intriguing feature of this ancient species is that it has blue copper-based blood. 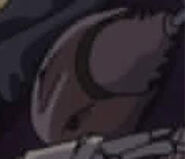