Sailor Saturn is one of the four Outer Senshi of the Solar System, and was the tenth Sailor Senshi to be introduced in the manga. Her civilian identity is Hotaru Tomoe. Her attacks are based around silence and destruction, death, and rebirth; she has the ability to annihilate a planet and even an entire star system, as well as resetting the evolution of the same to zero and powers granted by her Silence Glaive. This is the original depiction of the character created by Naoko Takeuchi.

They were mouse ladies

She played Princess Jasmine in Miles "Tails" Prower and Hotaru Tomoe in: Tailsladdin

She is a Arabian Princess

She will play Amber in Pokemon The First Movie (TR22P Human Style). 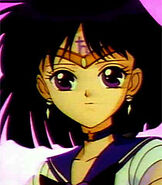 Sailor Saturn in the TV Series

Hotaru in her Pajamas 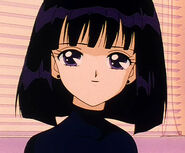 Add a photo to this gallery
Retrieved from "https://parody.fandom.com/wiki/Hotaru_Tomoe?oldid=2101202"
Community content is available under CC-BY-SA unless otherwise noted.