Like her pony counterpart, Rarity is very generous and has a keen eye for fashion. She disguises Twilight to hide her from the CHS students' ridicule, and she comes up with the idea of handing out pony ears and tails. Rarity also likes doting on the dragon-turned-puppy Spike, finding him "so adorable" and letting him sleep in her lap at the Sweet Shoppe.

Rarity's generosity and love for fashion carry over into the second and third films as well. In Rainbow Rocks, she greatly concerns herself with making a good stage impression, and in Friendship Games, she says putting effort into clothes and spending time on my friends are what she lives for.

Rarity also has a bit of a fascination with royalty, as she is excited to learn that Twilight Sparkle is a princess and has her own castle.

The human version of Rarity has white skin, purple hair, with three cut-out blue diamonds and dark blue eyes (eyes are light blue shadows) with long lashes and roving eyebrows. She originally wore a blue elbow-sleeved blouse, a purple skirt with her pony counterpart's cutie mark, a tense purple belt buckle and purple boots in a high wedge heel, which tops are covered with a single Diamond and yellow gold bracelets on both hands.

For Rarity's Fall Formal Outfit, she wore a long blue dress with a shoulder strap. Her boots are large and white with pink soles at the bottom. The top of each boot is decorated with diamond crystals and trimmed with a pink stripe.

In Rainbow Rocks, during the Battle of the Bands, Rarity is wearing a dress of her own design. The color of the dress is pink, and the left sleeve is an eight-star blue emblem. It also has a black belt with a gray circle in the middle. Below we see the rest of pink dresses. At the bottom we see the two black stripes on the left and the right blue diamond crystal shape. Going down, we see socks in two colors: on the left leg is blue and pink on the right. Below are pink shoes with three diamond-shaped blue crystals. In addition, she has two additional highlights in her hair: blue and pink.

In Friendship Games, at the welcome party, Rarity is wearing a blue dress. The top of the dress has a clear neckline and necklace around the neck. Your hips have a blue bar with a bow. The bottom of the dress is divided into two: on one side of the stamp elements rarity appear, and on the other hand the deep blue stripes in the distance. Rarity also wore purple high heels.

During the second phase of the Games, in Rarity equipment the rollerblading, which she designed and sewed. She has a blue sleeveless blouse, a green scarf around her neck. She wears a short, light purple shorts with light blue leggings that reaches the calf, which carry the seal of her elements. She has pink pillows on her wrists and purple on her elbows and knees, and on her head, a pink helmet, on the sides of the logo is displayed Wondercolts. Their skates are blue and white. Her hair was tied with a pink ribbon.

In the Digital Series, Rarity wears a blue sleeveless tank top with a frilly detail on the bottom, a new purple skirt, gold bracelets and purple high heel shoes with the cutie mark on them. When she is at the beach, she wears a purple bikini with a blue sarong. 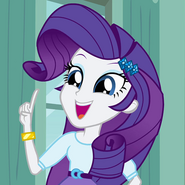 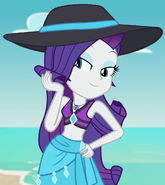 Rarity in her bikini and sarong

Rarity in a bikini

Rarity in a sexy swimsuit

Rarity celebrating the 4th Of July in a American flag bikini

Rarity in her swimsuit

Rarity in her bikini

Rarity showing her new swimsuit in the design room 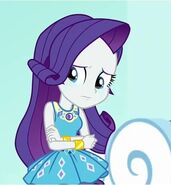 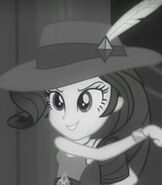 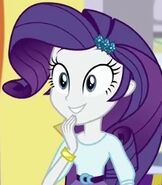 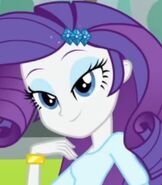 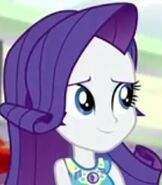 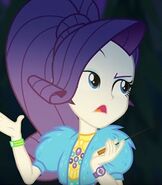 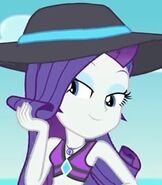 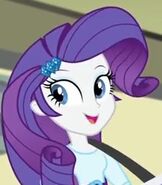 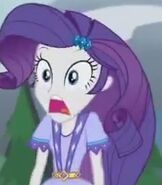 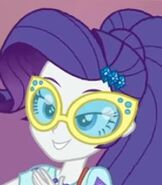 Rarity in a blue swimsuit

Rarity in the frozen food aisle

Rarity warming up her butt near a heater. 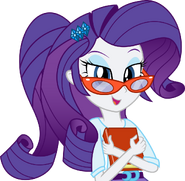 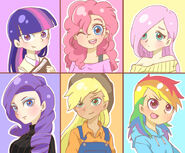 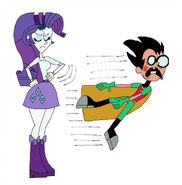