The humphead wrasse is the largest living member of the family Labridae. Males are typically larger than females and are capable of reaching lengths of up to 2 meters from tip to tail and weighing up to 180 kg, but the average length is generally a little less than 1 meter. Females rarely grow larger than one meter in length. This species of fish can be easily identified by its large size, thick lips, two black lines behind its eyes, and the hump that appears on the forehead of larger adults. The color of the humphead wrasse can vary between a dull blue-green to more vibrant shades of green and purplish-blue. This particular reef fish prefers to live singly but adults are occasionally observed moving in small groups. 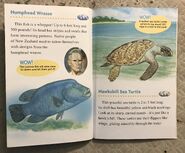 Add a photo to this gallery
Retrieved from "https://parody.fandom.com/wiki/Humphead_Wrasse?oldid=2425838"
Community content is available under CC-BY-SA unless otherwise noted.