Weasel is the extremely gifted and talented protagonist of the series. He is a handsome young weasel who, although famous, is not snobby or stuck-up and is rather generous (for in one episode he donated his kidney to a sickly little boy in a kidney transplant) and is the distinguished celebrity who everyone admires. He is highly intelligent and has many skills (both social and practical), and is proficient in most known professions. Though Weasel was never a bully to him, the fellow main character I.R. Baboon is always trying to top the admired Weasel because he wants an equal or better share in admiration, though unlike his rival, Baboon is extremely idiotic and the target for ridicule because of his bright red buttocks, but Weasel tries to generously help out his friend. Weasel is often assisted by a beautiful woman named Loulabelle who likes to dress as a nurse.

He plays Mushu in Elenalan 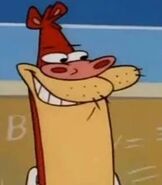 Retrieved from "https://parody.fandom.com/wiki/I.M._Weasel?oldid=2464886"
Community content is available under CC-BY-SA unless otherwise noted.