The Parody Wiki
Register
Don't have an account?
Sign In
Advertisement
in: Characters, Animals, European Animals,
and 33 more

The Iberian lynx (Lynx pardinus), also called the Spanish lynx, is the world's most threatened species of cat and is currently teetering on the brink of extinction. A medium-sized species, it is smaller than the Eurasian lynx (Lynx lynx), with which it shares a characteristically bobbed tail, spotted coat, muscular body and long legs. The relatively short, coarse fur is bright yellowish-red to tawny in colour, overlaid with brown or black spots, and the underparts are white. The male Iberian lynx is larger than the female, and both possess prominent whiskers on the face and long, erect tufts of black hair on the tips of the ears. The Iberian lynx feeds mainly on wild rabbits and may bury uneaten prey to return to the following day. There are thought to be only two isolated breeding populations of Iberian lynx. The Iberian lynx is mainly nocturnal and is a solitary animal except during the mating season. 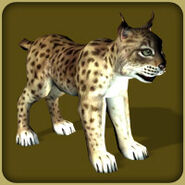 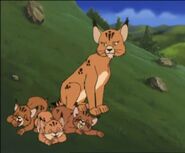 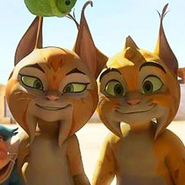 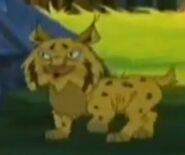