The Parody Wiki
Register
Don't have an account?
Sign In
Advertisement
in: Disney characters, Males, Singing Characters,
and 18 more

Ichabod Crane is a character and the main protagonist of Disney's 1949 short The Legend of Sleepy Hollow, segment to the 1949 film The Adventures of Ichabod and Mr. Toad.

The Adventures of Ichabod and Mr. Toad

Ichabod Crane is the schoolmaster who arrives in Sleepy Hollow to teach kids at the school. He loves to eat and read a lot. He also teaches women in the chorus where he gets tricked by his rival Brom Bones by making both a dog howl. Soon, Ichabod meets a beautiful girl named Katrina Van Tassel, the daughter of a rich farmer and falls in love with her. One day, Ichabod offers to carry Katrina's groceries home for her, but finds that Brom Bones who also has fallen in love with her, sees this, and knocks Ichabod down into the mud and carries Katrina and her groceries home on his horse. However, Ichabod manages to catch up and takes Katrina and her groceries home. When they arrive at Katrina's house, Ichabod kisses Katrina's hand, but just as he's about to leave, Brom shows up. Ichabod runs into Katrina's house and gives her some flowers to which Katrina puts one in Ichabod's shirt pocket. Just as Ichabod is about to leave again, Brom grabs him and is about to hit him, but Katrina manages to distract Brom by waving at him, and Ichabod escapes happily dancing and playing around on his way home.

Soon, Katrina's father is having a Halloween party to which Ichabod attends with a horse that he has borrowed to travel on. At the party, Ichabod dances with Katrina, and as Brom tries to steal her away from him, Ichabod manages to get Katrina back and steals the whole dance floor with her causing everyone to clap for them at the end, much to Brom's jealousy. Later on at the party, Brom, taking advantage of Ichabod's naiveté, tells a scary story about a Headless Horseman who rides every Halloween night in the Sleepy Hollow forest looking for a new head. The story frightens Ichabod so much that he manages to put red hot pepper on his egg without realizing it, causing his eyes begin to water really badly and smoke to come out.

Soon, Ichabod sees the bridge that Brom said, "Once you cross that bridge, my friends, the ghost is through, his power ends." Ichabod urges his horse to run towards the bridge, but ends up getting his horse accidentally turned around, then runs back into the direction of the Headless Horseman where Ichabod sees that the evil Horseman really doesn't have a head. Ichabod and his horse run once again with the Headless Horseman chasing them, but finally make it across the bridge where Ichabod looks back to see if he is safe and screams as the Headless Horseman throws his pumpkin at him. The schoolteacher tries to dodge the terrible missile by ducking, but is too late when it hits him with a tremendous crash and explodes.

The next day, Ichabod's hat is found next to a shattered pumpkin, since that is the only trace of Ichabod himself. Shortly afterward, Brom Bones marries Katrina. Rumors begin to spread that Ichabod is still alive and married to a wealthy widow in a distant county with seven kids looking like him, though some of people of Sleepy Hollow don't believe the rumors and some do believe them since they say that he must have been spirited away by the Headless Horseman.

Ichabod Crane appears as one of the guests in House of Mouse.

In the Beginning of "Halloween with Hades" Mickey tosses a Jack-O-Lantern toward Ichabod Crane who is shaking (since he's seated with the Headless Horseman and his pumpkin head). The pumpkin lands on Ichabod's head, covering it. The Headless Horseman screeches and runs away leaving Ichabod turning his head with a very confused look.

This is Your Life, Donald Duck

Ichabod appears as one of the guests at the end of the show with other Disney characters. Despite that he appears in the film, he doesn't appear in the comic adaptation.

The Parody Wiki has a collection of images and media related to Ichabod Crane. 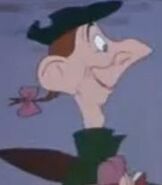