Ichthyosaurus ('fish lizard') is a genus of ichthyosaurs from the late Triassic and early Jurassic (Rhaetian - Pliensbachian) of Europe and Asia. It is among the best known ichthyosaur genera, with the Order Ichthyosauria being named after it. Ichthyosaurus was the first complete fossil to be discovered in the early 19th century by Mary Anning in England. Ichthyosaurus were smaller than most of their relatives, with individuals measuring up to 2 metres (6.6 ft) in length. Hundreds of well-preserved, fossilised skeletons have been found in Jurassic rock at Holzmaden, Germany. Some of the bones were still articulated. Some fossils still had baby specimens inside them, indicating that Ichthyosaurus was viviparous. Similar finds in the related Stenopterygius also show this. The German fossils also featured the outline of Ichthyosaurus's skin, revealing that it had a fleshy dorsal fin on its back and a large caudal fin. Other ichthyosaur fossils showed this feature was not limited to Ichthyosaurus. 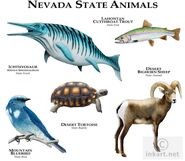 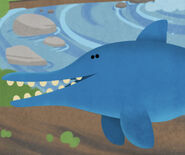