The Parody Wiki
Register
Don't have an account?
Sign In
Advertisement
in: Characters, Animals, Extinct Animals,
and 45 more

Iguanodon is a genus of ornithopod dinosaur that existed roughly halfway between the first of the swift bipedal hypsilophodontids of the mid-Jurassic and the duck-billed dinosaurs of the late Cretaceous. While many species have been classified in the genus Iguanodon, dating from the late Jurassic Period to the late Cretaceous Period of Asia, Europe, and North America, research in the first decade of the 21st century suggests that there is only one well-substantiated species: I. bernissartensis, which lived from the late Barremian to the earliest Aptian ages (Early Cretaceous) in Belgium and possibly elsewhere in Europe, between about 126 and 125 million years ago. Iguanodon were large, bulky herbivores. Distinctive features include large thumb spikes, which were possibly used for defence against predators, combined with long prehensile fifth fingers able to forage for food. 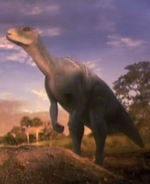 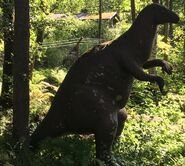 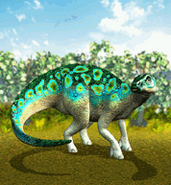 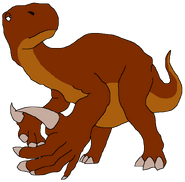 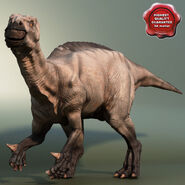