The Indefatigable Island tortoise (Chelonoidis nigra) was once so numerous that Spanish explorers of the region named the Galapagos archipelago after its extraordinary inhabitant; 'galapagos' means 'tortoise' in Spanish. This giant reptile is the largest living tortoise, with relatively heavy limbs, a long neck and a heavy carapace that can reach lengths of up to 150 centimetres. The different subspecies of the Galapagos tortoise illustrate the principal of ‘adaptive radiation’, where populations isolated on islands or on parts of larger islands within the Galapagos chain have adapted to different conditions, and now have distinct appearances. The subspecies can be generally separated into those with 'domed' shells, which occur on the larger, wetter islands, and smaller tortoises with 'saddleback' carapaces that are found on smaller islands with dry vegetation. It is thought that the distinctive saddleback shell of some populations of the Galapagos tortoise enables its bearer to reach taller vegetation, with these tortoises also having longer limbs and necks. 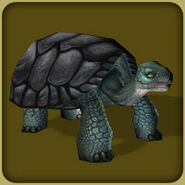 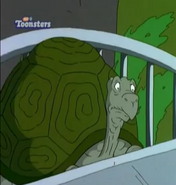 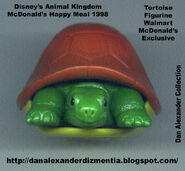 Add a photo to this gallery
Retrieved from "https://parody.fandom.com/wiki/Indefatigable_Island_Tortoise?oldid=2038926"
Community content is available under CC-BY-SA unless otherwise noted.