The Parody Wiki
Register
Don't have an account?
Sign In
Advertisement
in: Characters, Animals, Asian Animals,
and 26 more

The Indian leopard (Panthera pardus fusca) is a leopard subspecies widely distributed on the Indian subcontinent. The species Panthera pardus is listed as Vulnerable on the IUCN Red List because populations have declined following habitat loss and fragmentation, poaching for the illegal trade of skins and body parts, and persecution due to conflict situations. The Indian leopard is one of the five big cats found in India, apart from the Asiatic lion, the Bengal tiger, the snow leopard and the clouded leopard. In 2014, a national census of leopards around tiger habitats was carried out in India except the northeast. 7,910 individuals were estimated in surveyed areas and a national total of 12,000-14,000 speculated. 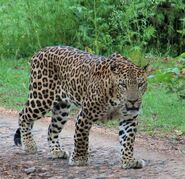 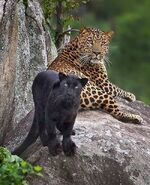