The Parody Wiki
Register
Don't have an account?
Sign In
Advertisement
in: Characters, Animals, Asian Animals,
and 30 more

The Indian muntjac (Muntiacus muntjak), also called red muntjac and barking deer, is a common muntjac deer species in South and Southeast Asia. It is listed as Least Concern on the IUCN Red List. It has soft, short, brownish or greyish hair, sometimes with creamy markings. This species is omnivorous, feeding on grass,fruits, shoots, seeds, birds' eggs as well as small animals. It sometimes displays even scavenging behavior, feeding on carrion. It gives calls similar to barking, usually upon sensing a predator (hence the common name for all muntjacs of barking deer). The male Indian muntjac has small, unbranched antlers which grow to about 15 centimeters (5.9 in) in length. The antlers grow annually from a bony stalk on the top of the head. Males are extremely territorial and—despite their diminutive size—can be quite fierce. They will fight each other for territory using their antlers or their (more dangerous) tusk-like upper canine teeth, and can even defend themselves against certain predators such as dogs. The Indian muntjac has a short but very soft, thick, dense coat, especially those living in cooler regions. Coloration of the coat changes from dark brown to yellowish and grayish brown depending on the season. The muntjacs' coat is golden tan on the dorsal side and white on the ventral side of the body, the limbs are dark brown to reddish brown, and the face is dark brown. However, the ears have very little hair which barely covers them. Male muntjacs have antlers that are very short, about 1–2 inches, usually consisting of only two or three points at the most and protrude from long body hair covered pedicels on the forehead. Females have tufts of fur and small bony knobs where the antlers are located in males. Males also have slightly elongated upper canines about an inch long that curve slightly outward from the lips and have the capability to inflict serious injury upon other animals or to other members of the population while exhibiting aggression. Males are generally larger than females. The body length of muntjacs varies from 35–53 in long and their height ranges from 15–26 in tall. The Indian muntjac is among the most widespread but least known of all mammals in South Asia. It is found in Bangladesh, southern China, northeastern India, Sri Lanka, Nepal, Pakistan, Cambodia, Vietnam, the Malay Peninsula, the Riau Archipelago, Sumatra, Bangka Island, Belitung, Java, Bali, and Borneo. This species is most densely located in Southeast Asia. The Indian muntjac is found in tropical and subtropical deciduous forests, grasslands, savannas, and scrub forests, as well as in the hilly country on the slopes of the Himalayas. They are found at altitudes ranging from sea level up to 3,000 m (9,800 ft). They never wander far from water. Also, males usually have their own territory, which may overlap the territories of a few females but not of another male. 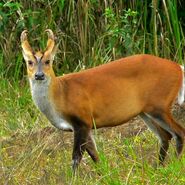 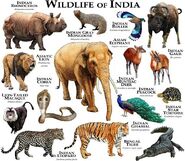