The Parody Wiki
Register
Don't have an account?
Sign In
Advertisement
in: Characters, Animals, Asian Animals,
and 14 more

The Indian pangolin (Manis crassicaudata) possesses some of the most effective armour in the mammalian world. Around 13 rows of sharp, moveable scales, which are shed periodically, cover its body. The snout, the inside of the limbs and the underside of the body are unprotected, but the pangolin can roll up into a tight ball when threatened, thus ensuring only its scales are exposed. The Indian pangolin also has three or four hairs in between each of its scales, providing protection from attacks from its primary prey – ants and termites. The Indian pangolin is well adapted to this highly specialised diet, bearing three strong claws on each of the forelimbs to enable it to tear about termite mounds and ant nest, and a strong prehensile tail that is uses as support as it does so. It also has a remarkably long tongue, measuring up to 25 centimetres long, that is used to lick up its insect prey. Incredibly, the muscular tongue is anchored to the pangolin’s pelvis. The Indian pangolin's vocal expressions are limited to loud hisses when agitated, so instead it uses its acute sense of smell in communication. Faeces and urine are spread around the territory to advertise its sexual status, and possibly also so that other individuals may recognise it. Giving birth after just 65 to 70 days, the Indian pangolin has the shortest gestation period of all Pholidota species. When threatened, the Indian pangolin emits a loud hissing sound and scatters faeces and urine. 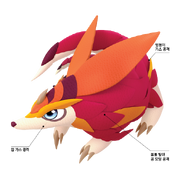