The Parody Wiki
Register
Don't have an account?
Sign In
Advertisement
in: Characters, Animals, Asian Animals,
and 15 more

The Indian wolf (Canis lupus pallipes) is generally smaller than the Eurasian wolf, being 3 ft (91 cm) in length and 26 in (66 cm) high at the shoulder, while the tail is 16 to 18 in (41 to 46 cm) long. The pelage is shorter than that of northern wolves, and has little to no underfur. Fur colour ranges from greyish-red to reddish-white with black tips. The dark, V-shaped stripe over the shoulders is much more pronounced than in northern wolves. The underparts and legs are more or less white. The skins of Indian wolves in the British Museum are almost invariably browner than those of European wolves. Indian wolves, like Arabian wolves, have short, thin fur in summer, though the hair on their backs remains long even in summer. This is thought to be an adaptation against solar radiation. The winter coat is long, though not as long as northern subspecies. The contour hairs on the shoulder measure 50–85 mm in length, 35–65 mm on the flanks. Even the longest hairs never reach the same lengths as those of the Tibetan wolf. 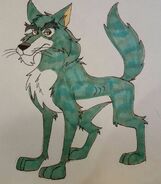 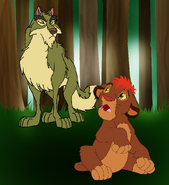 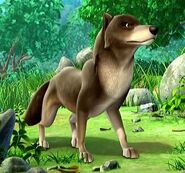 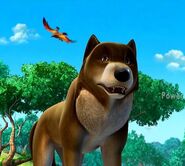 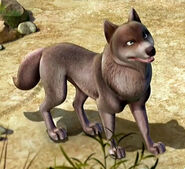 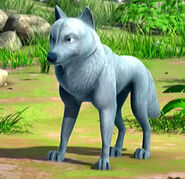