Isabella Garcia-Shapiro is a character from Phineas and Ferb.

She is a former Just Dancer for the following versions of the game (Hamham31 Version only):

This was her last appearance (alongside the other characters of Phineas N' Ferb series). They left the game for an unknown reason. They replaced by Adventure Time characters in their place on Just Dance 2016.

Later, she was re-introduced in the mentioned game (suppossedly with Phineas) as a returning character on the game with the song One Kiss.

Isabella appears in Cartoons 300 1/2 as one of the Main Characters. She is the Member of Team Phineas and Ferb 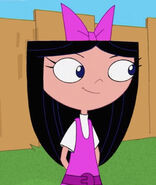 Isabella Garcia-Shapiro in the TV Series 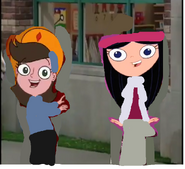 Add a photo to this gallery
Retrieved from "https://parody.fandom.com/wiki/Isabella_Garcia-Shapiro?oldid=2460265"
Community content is available under CC-BY-SA unless otherwise noted.