The Parody Wiki
Register
Don't have an account?
Sign In
Advertisement
in: Characters, Planes Characters, Female Characters,
and 27 more

Ishani is a plane from Planes.

The reigning Pan-Asian champion from India, Ishani is easy on the eyes, but ruthless in the skies. Thanks to her high-speed competitiveness and notable talent, she has amassed more than a billion loyal fans—including one rookie racer who turns to her for guidance. Exotic and mysterious, Ishani is full of surprises, but always has her eye on the prize.

Ishani is painted in different colors on different parts of her bodywork. She has yellow paint at the front, and red on the rest of her bodywork, with a fade of orange between the yellow and red two colors. She has green eyes, and also has green, purple and gold shapes which are meant to represent Indian beauty makeup. On her sides, she has her racing number #6 painted in green, and an inscription of her name painted in gold. She is based on the AeroCanard FG kit aircraft, although her nose is thinner, her front wings are different, and she has only one side window on each side. Her propeller is located at the back rather than the front, and has five blades. She has a wingspan of 32.8 feet (10 meters).

Ishani appears in her own short, called Meet Ishani, that was made to promote the first film. In the short, Ishani is being interviewed by the press at the Wings Around the Globe. Despite her spokesperson telling the press to ask no more questions, one of the interviewers asks Ishani if she really thinks a female like her would win the Wings Around the Globe, leaving the rest of the press shocked. Ishani is secretly angered when she hears this, but publicly states she would like to answer the question. While she performs a song about flying fast and high during races, a group of dancers tie the interviewer up with ribbons, leading to him deciding not to ask any more questions.

Ishani is one of the planes who have qualified for the Wings Around the Globe, even having a lot of fans from India who are wanting her to win. At John F. Kennedy International Airport, she comes across Dusty Crophopper, a crop duster who had just entered into the Wings Around the Globe. Immediately, she is nice to him, admitting that it is a great pleasure to meet him, while taking a liking to him. The next day, all of the racers take part in the first leg of the Wings Around the Globe, which starts in New York City and ends in Iceland. Ishani has no trouble at all, even in the second leg which goes from Iceland to Germany, though she has finished beneath the top three in both legs. After finishing the second leg, she goes to the pub with the other racers, where Ripslinger comes to her and whispers something about Dusty.

While a few planes are out of the third leg that is from Germany to India, Ishani continues, and finishes in seventh place, just ahead of Dusty. However, Ripslinger is wanting to make sure that Dusty does not beat him, and tries to use Ishani to help. She comes to Dusty's hangar, wanting to give him congratulations for finishing in the top eight. Dusty appreciates her congrats, stating how aerodynamic she is. Soon, Ishani takes Dusty out, wanting to show him the Taj Mahal, along with explaining about the millions of fans she has around India. On their way back, Ishani gives Dusty advice on following a railroad track, so that he does not have to face his fear of heights in the next leg which goes through the Himalayas. The next day, before the leg starts, Ripslinger gives Ishani one of his team's Sky Slycer propellers, having heard about the advice. To everyone's surprise, Dusty wins the leg, having to go through a tunnel and nearly hitting a train at the other end. Next, Dusty notices Ishani's new propeller, and begins to realize that Ripslinger had been using her to set him up. Ishani tries to admit that she was not wanting to hurt him, and thought that he would turn around the tunnel, but Dusty scolds her, telling her that he had been wrong about her the whole time. Afterwards, Dusty ignores her throughout the next few races.

In Mexico, everyone begins to wonder where Dusty is, while Ripslinger, Ned and Zed make insults about him. Angered, Ishani and El Chupacabra stand up to Ripslinger, telling him that Dusty is more competitive than him, and that he should not insult Dusty. Meanwhile, Dusty gets caught in a storm above the Pacific Ocean, and falls into the sea, not long before he gets rescued and transported to Mexico. However, he is left extremely damaged, making him unfit to take part in the final leg. Luckily for him, most of the nice racers come to help by giving him spare parts. Joining in, Ishani gives Dusty her Sky Slycer propeller, as she has decided that she will use her old propeller in the final leg. It is also enough for Dusty to reconcile his friendship with her.

Being able to race once again, Dusty beats Ripslinger to the title, and everyone is amazed by his victory. Ishani is also proud, stating that Dusty is her and the world's new champion. 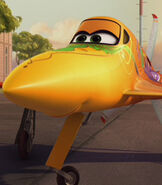 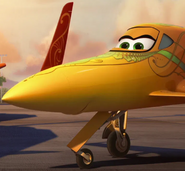 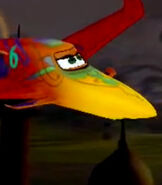 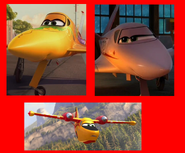 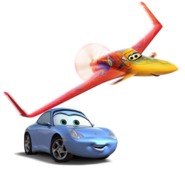