The Parody Wiki
Register
Don't have an account?
Sign In
Advertisement
in: Characters, Animals, North American Animals,
and 12 more

The ivory-billed woodpecker (Campephilus principalis) is one of the largest woodpeckers in the world, at roughly 20 inches (51 cm) in length and 30 inches (76 cm) in wingspan. It is native to the virgin forests of the southeastern United States (along with a separate subspecies native to Cuba). Because of habitat destruction and, to a lesser extent, hunting, its numbers have dwindled to the point where it is uncertain whether any remain, though there have been reports that it has been seen again. Almost no forests today can maintain an ivory-billed woodpecker population. The ivory-billed woodpecker ranks among the largest woodpeckers in the world and is the largest in the United States. The closely related and likewise possibly extinct imperial woodpecker (C. imperialis) of western Mexico is, or was, the largest woodpecker. The Ivory-billed has a total length of 48 to 53 cm (19 to 21 in) and, based on very scant information, weighs about 450 to 570 g (0.99 to 1.26 lb). It has a typical 76 cm (30 in) wingspan. Standard measurements attained included a wing chord length of 23.5–26.5 cm (9.3–10.4 in), a tail length of 14–17 cm (5.5–6.7 in), a bill length of 5.8–7.3 cm (2.3–2.9 in) and a tarsus length of 4–4.6 cm (1.6–1.8 in). 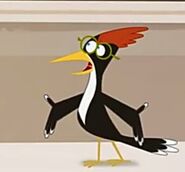