This distinctive gull (Pagophila eburnea) is most striking in appearance when in its pure white adult plumage, which blends beautifully into its icy, Arctic habitat. Immature ivory gulls also have white plumage, but have a scattering of brownish-black spots on the body and the tips of the wing feathers. In the young gull’s second winter, this is replaced with the brilliant white plumage. The ivory gull has dark eyes and a bill that is slate blue at the base, turning pale yellow and tipped with red. It has short, black legs, which with its stocky-build and rolling gait gives it a pigeon-like appearance on the ground. Despite its appearance when walking, the ivory gull is an agile and graceful bird when in the air. 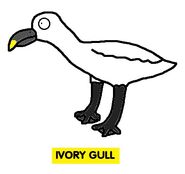 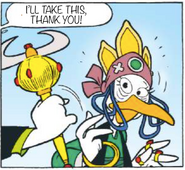