In Norse mythology, Jörmungandr (Old Norse: Jǫrmungandr, meaning "huge monster"), also known as the Midgard (World) Serpent (Old Norse: Miðgarðsormr), is a sea serpent, the middle child of the giantess Angrboða and Loki. According to the Prose Edda, Odin took Loki's three children by Angrboða - the wolf Fenrir, Hel, and Jörmungandr - and tossed Jörmungandr into the great ocean that encircles Midgard. The serpent grew so large that it was able to surround the earth and grasp its own tail. As a result, it received the name of the Midgard Serpent or World Serpent. When it releases its tail, Ragnarök will begin. Jörmungandr's arch-enemy is the thunder-god, Thor. It is an example of an ouroboros. 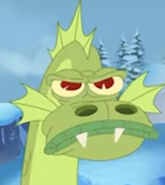 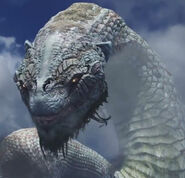 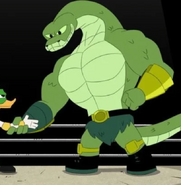 Add a photo to this gallery
Retrieved from "https://parody.fandom.com/wiki/Jörmungandr?oldid=2443541"
Community content is available under CC-BY-SA unless otherwise noted.