Start a Wiki
Jacob Pneumatic is an electric transit engine. He appears in An American Tail: The Treasure of Manhattan Island and Casey Jr. and Friends.

An American Tail: The Treasure of Manhattan Island

Tiger accidentally pulls a lever which starts the fan that propels Jacob, causing him to rush down the tracks crushing all the debris in its path & Fievel and Tony run for their life when Tony helps Fievel when his shirt is stuck on a nail. Tony is able to help Fievel and they barely survive.

Jacob Pneumatic is of a freelance design. Therefore, he is not based on a specific prototype.

Jacob is bright yellow and emerald green. His windows and air intake have red frames. 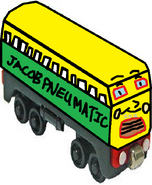 Add a photo to this gallery
Retrieved from "https://parody.fandom.com/wiki/Jacob_Pneumatic?oldid=2153971"
Community content is available under CC-BY-SA unless otherwise noted.