Jacqueline (Japanese: ジャクリーン Jacqueline) is a character of the day who appeared in Sobble Spies a Stealthy Strategy!.

She is an actress who starred alongside her Inteleon in a popular action movie called "Spy and Sidekick", in which she portrays a spy. Due to the success of this movie, a sequel was made and slated to be directed by Kublock. While filming a scene for this movie, they were interrupted by Team Rocket, who attempted to steal Inteleon. When they battled Ash and Goh, Inteleon was able to send them blasting off with Snipe Shot. This caused Goh's Sobble to look up to Inteleon.

Jacqueline later appeared when Ash and Goh saved a crew member's Gothita from Team Rocket and praised Sobble on its work.

She reappeared in a flashback in Not Too Close for Comfort!. 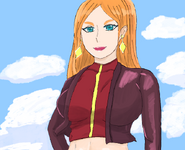