The Parody Wiki
Register
Don't have an account?
Sign In
Advertisement
in: Characters, Animals, Asian Animals,
and 72 more

Known as the snow monkey, the Japanese macaque (Macaca fuscata) is the most northerly occurring non-human primate. In general, macaques are strong-limbed, medium-sized monkeys with stout bodies. This species has long, dense fur which is brown to grey in colour. The thick fur contrasts with the naked skin of the face and rump, which is red in adult Japanese macaques. It has long whiskers, a beard and a relatively short tail. The male Japanese macaque is larger than the female. The Japanese macaque utilises a variety of vocalisations, including shrill alarm barks, squawks of surprise and growls of aggression. 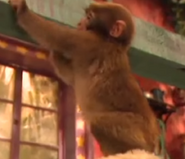