Start a Wiki
Jasmine (Japanese: ミカン Mikan) is the Gym Leader of Olivine City's Gym, known officially as the Olivine Gym. She specializes in Steel-type Pokémon, and she gives the Mineral Badge to Trainers who defeat her in battle. She also appears in Sinnoh to give Trainers HM07 (Waterfall) and to compete in Sinnoh's Super Contests. 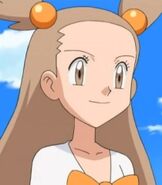 Add a photo to this gallery
Retrieved from "https://parody.fandom.com/wiki/Jasmine_(Pokemon)?oldid=1962370"
Community content is available under CC-BY-SA unless otherwise noted.