Jasper and Horace are Cruella De Vil's bumbling henchmen and the secondary antagonists of the first 101 Dalmatians film.

They played Tweedledee and Tweedledum in June in Wonderland

He played Nikki and Kaltag in Pinocchilto

He played Lord Rothbart in The Mermaid Princess (PierrickCanalFamille)

He played Honest John and Gideon in Peterocchio

He played Scratch & Grounder in The Adventures of Ariel the Mermaid

He is a Robot Henchmen

He played Anchor and Chum in Finding Léo

He played Mr. Snoops in The Rescuers (PierrickCanalFamille Style)

He played Splatter and Dodge in Ariel and the Magic Sea

He played The Straycatchers in Oscar and Elmo: The Movie 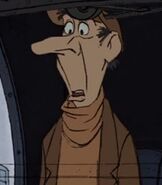 Jasper Badun in One Hundred and One Dalmatians 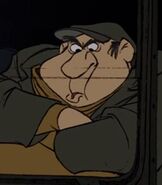 Horace Badun in One Hundred and One Dalmatians

Retrieved from "https://parody.fandom.com/wiki/Jasper_and_Horace?oldid=2160971"
Community content is available under CC-BY-SA unless otherwise noted.