The Javan gibbon (Hylobates moloch), also known as the silvery gibbon, is a primate in the gibbon family, Hylobatidae. Its coat is bluish-grey in color, with a dark grey or black cap. Like all gibbons, silvery gibbons lack external tails, have dorsally placed scapulae, and reduced flexibility in their lumbar regions. They have long, curved fingers and very long forelimbs relative to their hind limbs. On average, they reach 8 kg in weight. The silvery gibbon lives exclusively on the island of Java (Indonesia), where it inhabits deeply hidden portions of the rain forests. It is diurnal and arboreal, climbing trees skillfully and brachiating through the forests. Brachiation is aided by the possession of mobile wrist joints, full rotation of the upper arm, and the ability to lock elbows in suspension. Its diet consists of fruits, leaves, and flowers. Every three years, on average, the female gives birth to a single young, after a seven-month gestation. The offspring is nursed for about 18 months and lives with the family group until it is fully mature at about eight to ten years old. 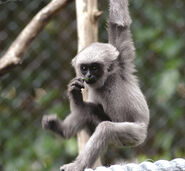