The Javan tiger (Panthera tigris sondaica) is an extinct tiger subspecies that inhabited the Indonesian island of Java until the mid-1970s. It was one of the three subspecies limited to islands. The Javan tiger was very small compared to other subspecies of the Asian mainland, but larger in size than the Bali tiger. It usually had long and thin stripes, which were slightly more numerous than those of the Sumatran tiger. Its nose was long and narrow, occipital plane remarkably narrow and carnassials relatively long. Based on these cranial differences, the Javan tiger was proposed to be assigned to a distinct species, Panthera sondaica. Males had a mean body length of 248 cm (98 in) and weighed between 100 and 141 kg (220 and 311 lb). Females were smaller than males and weighed between 75 and 115 kg (165 and 254 lb). The smaller body size of the Javan tiger is attributed to Bergmann’s rule and the size of the available prey species in Java, which are smaller than the cervid and bovid species distributed on the Asian mainland. However, the diameter of its tracks are larger than those of Bengal tiger in Bangladesh, India and Nepal. 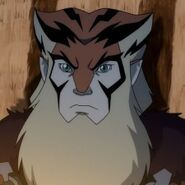