Jeff is one of the main characters in Pound Puppies and the Legend of Big Paw.

He is a teenager

He is a Pokemon trainer 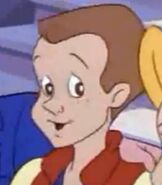 Add a photo to this gallery
Retrieved from "https://parody.fandom.com/wiki/Jeff?oldid=906646"
Community content is available under CC-BY-SA unless otherwise noted.