Jeremy Johnson is a supporting character from Phineas and Ferb. He is the crush and later boyfriend of Candace Flynn, older brother of Suzy Johnson and son of Jack Johnson and Mrs. Johnson. He often comes over to the Flynn-Fletcher House to enjoy Phineas and Ferb's large projects. Mitchel Musso confirmed in a Disney Channel spot that Jeremy returns Candace's feelings for him. Also, if Candace is angry about her brothers, once Jeremy comes for a visit, Candace's feelings seem to be soothed. His normal greetings to Candace tend to be "Hey, Candace", (to which she responds: "Hi, Jeremy.") and "Uh... Candace?" He works part-time at the Mr. Slushy Dawg fast food chain, which Candace frequently visits just to see him. He is also the lead singer and guitarist for the band Jeremy and Incidentals.

Jeremy played Shaggy Rogers in Alvin Doo, Where Are You! 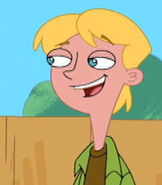