The Parody Wiki
Register
Don't have an account?
Sign In
Advertisement
in: Main Characters, Main Protagonists, Main Heroes,
and 60 more

Jethro "Jet" Eugene Bradley is the primary protagonist of TRON 2.0. In 2003, his father was kidnapped and while searching for him, he was digitized by Ma3a into the Game Grid.

Jet was born in December 1982 to Lora and Alan Bradley. His birth was announced to all the employees of ENCOM by the then-Senior Executive VP, Kevin Flynn, who was named Jet's godfather. In 1994, Jet lost his mother when Lora was fatally wounded in a lab-related accident concerning the digitizing laser. As a result of their loss, the relationship between Jet and Alan became strained.

As he got older, Jet's rebellious behavior became more frequent, causing his grades to suffer. Out of boredom, he hacked his school's computer system and was even arrested in one instance. Alan, disappointed with his son, states that his mother "would be crushed" by his behavior. Jet responds by requesting that he leave his mother out of the equation. Alan cites that Jet is irresponsible and with no future planned out, he won't be prepared for reality.

The comic book miniseries, TRON: The Ghost in the Machine, shows that Jet is living in the top floor apartment of Flynn's Arcade.

At the start of TRON 2.0, Jet Bradley works for the company ENCOM as programmer for their games department. He received a call from his father, who expresses his disappointment after finding out Jet rejected a level-6 access position. Jet dismisses Alan's disappointment, stating he rather spend his time making video games. Moments later, he overhears his father speaking to someone before the line goes dead. Concerned, Jet visits the lab and inquires to Ma3a the whereabouts of his father. Instead of answering, Ma3a declares that she requires his assistance activates the digitizing laser. Jet is caught off guard when he fails to realize the laser is above him and as a result, is transported into the Game Grid. Once inside, he is guided through the system by Byte (who he mistakes for a Bit) as he searches for Ma3a. He manages to evade the ICPs for a time before he is caught. Kernel, commander of the ICPs, plans to derez him under the belief that he is the cause of the corruption within the system. Jet tries to convince him that he is a User, which the Kernel, unconvinced, regards as a blasphemous insult to the Users.

Kernel is persuaded to spare his life by Mercury, who suggests that he be put in the games. Kernel agrees and Jet is forced to combat Game Bots in the light cycle arena. Upon reaching the final round, he is freed by Mercury who overheard he was searching for Ma3a. Acting on orders from her User, GUEST, she helps Jet retrieve his disc and the two escape through the data stream. On the way to the transport station, Mercury states that her user only meant for her to free Ma3a from her docking station, not combat the virus. Jet suspects that GUEST realized that battling the virus would've been a futile effort. The two separate to look for Byte, Jet finds him and eventually the two reach Ma3a's processing dock. Once she is released, ENCOM's sever, overwhelmed by the virus, begins to reformat. Mercury reappears and fends off a group of Z-Lots, allowing the three to escape through the exit port at the cost of her life.

On Alan's desktop, Ma3a explains to Jet why she digitized him. with Alan unavailable, he was the only User capable of combating the infection effectively within their world. She also reveals to him that Alan was kidnapped by FCon executives, Crown, Baza and Popoff, who want the Correction algorithms from Ma3a. With the help of Ma3a, Jet searches for e-mail fragments concerning the Tron Legacy Code and discovers the fate of Tron through those same fragments. Once the fragments are recovered, Jet, Byte and Ma3a stowaway on a Recognizer, Jet is advised by a disgruntled program to hide on the upper deck of the transport to evade the ICPs.

As their search for the Legacy Code continues, they are sidetracked by the appearance of a Seeker. Jet opts to distract it while Ma3a reverses the Power Oculus' defense protocols. Jet engages in a battle with the Seeker and several Resource Hogs on a test grid and wins. He discovers a new weapon when the test grid vanishes beneath his feet. When he regains consciousness, he meets I-No, an old program apart of ENCOM's old server. At the suggestion of Byte, Jet overloads the server to allow Ma3a passage and eventually discovers the Legacy Code in the archival area. They move on to the Net where they search for a high-level compiler to configure the Tron Legacy Code. Jet encounters a reformatted Mercury, who informs him that GUEST wishes to speak to him. Jet is unable to receive GUEST's message clearly and is left wondering what he wanted. They find the desired compiler in the Progress Bar, Ma3a convinces Jet to allow her to become the host of the Legacy Code when he receives another message from GUEST.

A video feed reveals that GUEST is his father, Alan, pleading with him not to configure the Legacy Code via written message. Realizing his error, Jet races back as Thorne appears and Ma3a merges with the Code. Too late, Jet witnesses as Ma3a becomes deranged and attacks Byte, derezzing him. She attacks Thorne, revealing his identity as a User, but regains control long enough to allow Jet to escape. Ma3a is captured by FCon's seeker program, Alan sends Mercury to aid Jet in entering the security system to set him free.

Jet later enters the heart of the corrupted area, unaware his father has been digitized until he receives another message from him. Jet eventually reaches his father and the two locate Thorne, who has been bested by Kernel. Kernel and Jet in engage in battle, with Jet emerging victorious in the end. Before he derezes, Thorne relays the location of Ma3a and gives the Bradley's access to his PDA. Jet is separated from his father in the transport to Thorne's PDA, who proves uncooperative in relinquishing the password until he nearly crashes her system.

The PDA sends Jet to the heart of the FCon server, where he encounters the DataWraiths on his way to bring down the firewall separating him from Alan. Once the firewall is down, Jet and Alan proceed to the carrier where Ma3a and the correction algorithms are being held by FCon. Jet is given the task of cutting off the power to the ship, while Alan reverses the affects of the Legacy Code, a failsafe against unauthorized Users, on Ma3a. Jet completes his mission and is informed by Alan that the FCon executives were corrupted by the digitization process when he removed the algorithms to verify their integrity.

FCon's sever begins to crash, Jet and Alan prepare to exit when Mercury reappears, disheartened that Jet is leaving the computer world. Jet promises to search for her after he warns her to leave the system before it crashes. As he steps into the digitizing beam, he is followed by the corrupted executives. He is unable to return to the real world until he defeats the corruption; eventually he knocks the creature out of the beam and is returned to the real world by Ma3a. Jet reemerges with his father just as the server goes down, enlightened by his journey into the computer world. 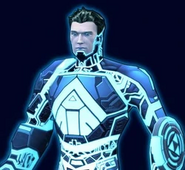 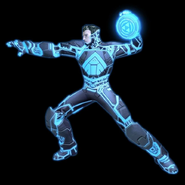