Jill Valentine is one of the three main protagonists of the Resident Evil franchise (alongside Leon S. Kennedy and Claire Redfield). She is a senior member of S.T.A.R.S. belonging on the same team as Chris Redfield.

Jill later resigns from S.T.A.R.S. in Resident Evil 3: Nemesis and attempts to escape from the t-virus infected town known as Raccoon City. She runs into Nemesis, a B.O.W. weapon from Umbrella Corporation. Jill has escaped from Nemesis a couple of times but until she infected by the t-virus when Nemesis implanted a tentacle in her arm. She also meets a member of the U.B.C.S. Carlos Oliveira. After hearing about a missile about to be launched and destroy Raccoon City, they escape, but before Jill could escape, Nemesis appear one last time and the final battle starts and ends with Jill as the winner.

In the Japanese version, she is voiced by Atsuko Yuya in most of her appearances and Kikuko Inoue in Under the Skin.

Numerous official documents, including her character file found in Resident Evil 5, highlight Jill's unrivaled ability to remain calm under extreme conditions, while the manual for the remake of the original Resident Evil says that her quick thinking has kept herself and her comrades alive on numerous occasions.

Her profile in Resident Evil 3 describes her as cheerful yet determined, with a strong sense of justice, while her involvement with S.T.A.R.S., a bio-hazard containment unit of Raccoon Police Department and co-founding, high ranking role within the Bioterrorism Security Assessment Alliance show her years of commitment to stopping biological terrorism and fighting for peace and the protection of innocents.

Jill is a loyal partner and friend to her fellow soldiers, particularly Chris Redfield. Her entire involvement in the Il Veltro conspiracy began through her search for Chris when he was reported missing. During the raid on Spencer's Estate, she proved that she was even prepared to give her life to protect Chris and stop their hatred enemy, Albert Wesker, when she tackled Wesker out of a window and over a cliff edge as he prepared to kill Chris.

When she was taken by Wesker, Jill was experimented on and brainwashed by P30 which took a heavy toll on her physically despite granting her super strength and agility. Against her will, Jill became loyal to Wesker and Excella assisting them in their plans and even going so far as to infect innocent lives with the Uroboros virus. Despite being used as a puppet, Jill was responsive and only spoke when necessary. She carried out her objectives without question.

Eventually, she did manage to fight back her brainwashed state which thanks to Chris' voice calling out her name, but the effects of P30 proved to be too powerful for her to resist. Regardless, once Chris and Sheva freed her from Wesker's control, she soon came back to her senses and aided them in their fight against Wesker. Being partners since at least 1998, they seem to share a very strong bond revolving around their partnership.

She played Maria Hill in The Avengers (paulodejesus18 version) 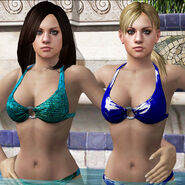 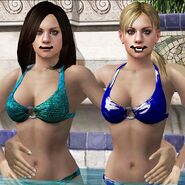 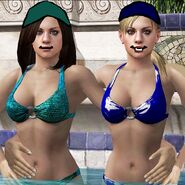