Jim Hawkins, his full name is James Pleiades Hawkins and for short is Jim. He is the main protagonist in Treasure Planet.

He is the son of Scar and Zira

He is an Ape Man

He is a loser

He is Hugo Young's best friend

He is a Big-nosed Monster

He is Basil's partner

He is a Superhero

Jim Hawkins plays Goofy in Hiro and The Beanstalk 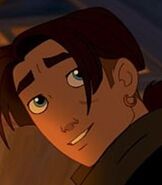 Add a photo to this gallery
Retrieved from "https://parody.fandom.com/wiki/Jim_Hawkins?oldid=2517292"
Community content is available under CC-BY-SA unless otherwise noted.