The Parody Wiki
Register
Don't have an account?
Sign In
Advertisement
in: Characters, Sing Characters, Male Characters,
and 19 more

Jimmy Crystal is the new villain in Sing 2. He is the head of Crystal Entertainment and the father of Porsha Crystal.

Jimmy is an artic wolf with white fur and blue eyes. He wears a shiny black suit, a white collared shirt with handkerchief in it's pocket, his two neckties and black shoes.

Crystal is best described as hard nose and overzealous, in which case will do whatever it takes to make big shows. He is also a tough crowd pleaser as he is never very easy to please. Crystal was also shown to be menacing and threatening when he urges someone to do something quickly and take anyone's credit.

While looking for new talent, Jimmy meets Buster Moon and his friends, who claim they can get retired rock star Clay Calloway to perform in his show. Liking the idea, Crystal orders to get things put up or throw him of a roof. However, later in the film, he learns that he has taken his daughter away. But at the end of the film, when he gives a speech and he is arrested for attempted murder. 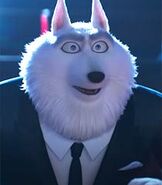 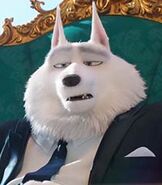