Joseph Francis "Joe" Alaskey (April 17, 1952 – February 3, 2016) was an American stand-up comedian, actor, voice artist, and impressionist who is credited as one of the successors of Mel Blanc in impersonating the voices of Bugs Bunny, Daffy Duck, Sylvester, Tweety and other characters from Warner Bros. cartoons, such as Plucky Duck on Tiny Toon Adventures from 1990–95. Alaskey was the second actor to voice Grandpa Lou Pickles on Rugrats (inheriting the role after David Doyle's death in 1997). He voiced Lou again in the Rugrats spin-off series, All Grown Up!. and all three films. He also voiced Stinkie in Casper as well as that film's 1996 animated spin-off, The Spooktacular New Adventures of Casper. 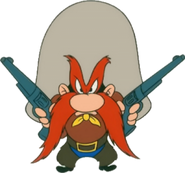 Grandpa Lou Pickles
Rugrats (1997-2008)
Add a photo to this gallery
Retrieved from "https://parody.fandom.com/wiki/Joe_Alaskey?oldid=2041710"
Community content is available under CC-BY-SA unless otherwise noted.