Joey Lynn King (born July 30, 1999) is an American actress. She starred as Ramona Quimby in Ramona and Beezus, the 2010 adaptation of Beverly Cleary's book series with the same title. She has also appeared in the films Oz the Great and Powerful, The Conjuring, White House Down, The Kissing Booth, Wish Upon, The Suite Life of Zack and Cody, The Act, and Slender Man.

King was born in Los Angeles. She has two older sisters, actresses Kelli and Hunter King. King has stated that she is "part Jewish and part Christian, but [...] mostly Jewish."

Joey King has been featured in the films Reign Over Me with Adam Sandler, and Quarantine. She voiced the yellow fur ball Katie, for the animated feature Horton Hears a Who! (2008), and Beaver, for Ice Age: Dawn of the Dinosaurs (2009). In 2010, she guest starred in the series Ghost Whisperer. She was also featured in The Suite Life of Zack & Cody as Emily Mason in two episodes. Other television appearances include Entourage, CSI: Crime Scene Investigation, and Medium.

King's first lead role was in the 2010 film Ramona and Beezus, an adaptation of the Beverly Cleary book series, starring as Ramona Quimby opposite Selena Gomez as her older sister, Beezus Quimby. She also released a single for the movie called "Ramona Blue".

King was featured in Battle: Los Angeles, where she played a girl named Kirsten. Also in 2011, she co-starred in Crazy, Stupid, Love as the younger daughter of Steve Carell and Julianne Moore. As well, she appeared in Taylor Swift's "Mean" music video as a young student at the school cafeteria rejected by her peers.

King had a role in Christopher Nolan's third Batman film, The Dark Knight Rises (2012), as a young Talia al Ghul. She also filmed the short-lived comedy series Bent, had guest appearances in New Girl and was on the final episode of The Haunting Hour: The Series, "Goodwill Towards Men." In 2013, King appeared in Oz the Great and Powerful with James Franco and Zach Braff, White House Down with Channing Tatum and Jamie Foxx, Family Weekend, and The Conjuring with Mackenzie Foy and Vera Farmiga. In 2014, she appeared in Wish I Was Here with Oz co-star Zach Braff, as well as in Fargo as Greta Grimly, daughter of police officer Gus Grimly (Colin Hanks).

In 2016, King was cast as the daughter of the character of Courtney Love in the coming-of-age drama film The Possibility of Fireflies. She played the lead character Claire in the 2017 horror-thriller film Wish Upon.

In 2018, she starred in The Kissing Booth alongside Jacob Elordi and Joel Courtney.

In 2019, she starred alongside Patricia Arquette in the true crime anthology television series The Act on Hulu. King plays Gypsy Rose Blanchard and Arquette plays her mother Dee Dee. She also appeared on the 4th season of CBS comedy Life in Pieces as Morgan.

At the 2015 Vancouver International Film Festival, the Canadian Images features jury made an honourable mention recognizing King as an Emerging Actress for her performance in Borealis. 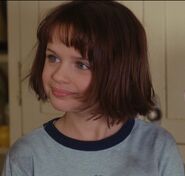 Add a photo to this gallery
Main Article

Retrieved from "https://parody.fandom.com/wiki/Joey_King?oldid=1733244"
Community content is available under CC-BY-SA unless otherwise noted.