Jorgen Von Strangle is a character from the Fairly OddParents. He is known by Timmy as the Fairy who enforces "Da Rules". He is the strongest Fairy that exists in Fairy World and is the boss or commander of all fairies, including Anti-Fairies which we see he guards in prison. His wife is the Tooth Fairy. (Later, in the episode Finding Emo, we see he dates a fairy without a crown named Wallet). He is one of the only fairies without wings, because he believes wings are too "girly". He appears in disguises for example as animals (i.e. a rhinoceros or a mussel) or as a potted cactus with a slight humanoid shape. He often acts mean towards his assistant named Binky.

Jorgen is the strongest and toughest fairy in Fairy World, and is the commander of the Fairy godparents, but not of all the fairy world (Because probably the Fairy Council probably command more than him), although the extent of how powerful or how much he commands is not exactly clear. When Jorgen was first introduced, he was more of an enemy of Timmy, and in a few cases tried to get Timmy's godparents taken away. He often took great pleasure in harassing everyone around him. As the show went on, Jorgen seemed to warm up to Timmy, Cosmo and Wanda, and he has become more of an ally than an adversary. He even admitted that Cosmo, Wanda, and Timmy were his closest friends. Sometimes Timmy must also clean up after the messes Jorgen makes, like when Fairy World lost all the power it was drawing from Mr. Crocker when he stopped believing in fairies, and when Foop escaped Jorgen's custody in Abracatraz to terrorize Poof.

He plays King Triton in The Little Keyblade Master 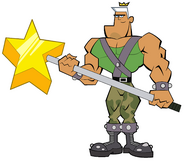 Add a photo to this gallery
Retrieved from "https://parody.fandom.com/wiki/Jorgen_Von_Strangle?oldid=2360875"
Community content is available under CC-BY-SA unless otherwise noted.