The Parody Wiki
Register
Don't have an account?
Sign In
Advertisement
in: Females, Female Characters, Characters,
and 36 more

Judy Neutron is Jimmy's mother from the Jimmy Neutron series.

Though she frequently has to discipline her son for his misbehavior, she is still a loving parent and wife. It is likely that Jimmy got his intelligence from Judy, as she has shown to have inventions of her own. She also likes to cook and is obsessed with cleaning.

Judy is a good role model for her husband and son, being the most responsible member of the family. She makes sure Jimmy doesn't misbehave, and keeps a close eye on her husband, even going as far as the track him with a microchip. She proves to be quite intelligent, creating inventions of her own that are kept secret inside her closet.

Despite her strictness and intelligence, Judy is quite susceptible to tricks and manipulation, especially hypnosis.

Judy is a caring and loving mother towards Jimmy and is very affectionate towards her husband, Hugh. However, she gets frustrated with Jimmy's antics and all the trouble he causes, usually having to give him a lecture or put him in his place. Sometimes, it is hinted that Jimmy might have gotten his super intelligence from his mother. She is obsessed with cleaning and is a bit of a germophobe.

In the Jimmy Timmy Power Hour, Timmy uses Jimmy's Hypno-beam to hypnotize Judy into believing she's a superhero named Mighty Mom. As a superhero, Judy spends her time dramatically cleaning the house. She even believes she can fly, when in reality she is simply running around with her arms in front of her.

Judy appears as an unlockable racer in Nicktoons Nitro Racing as a member of Team Timmy. She is brainwashed by Timmy, who used a stolen Hypno-beam to make her race as his teammate. Cosmo sits on Judy's shoulder and uses items for her. She is unlocked by completing the Arcade Mode with Timmy. Her home track is Fairy World.

In her Arcade Mode, Judy's rival racer is Sheen Estevez. Upon seeing Sheen's Ultra-Lord toy, Judy demands to clean it as it's covered it germs. Sheen says he'll let her clean it if she can beat him in a race. When Judy wins, she gets out rubber gloves and thoroughly cleans Ultra-Lord. Sheen, annoyed at losing, teases her for getting hypnotized by Timmy.

In her Arcade Mode ending, Judy is seen celebrating winning the circuit by doing the disco for the audience. Cosmo, also celebrating Team Timmy's victory, almost blows an air horn near Judy. He is stopped by Timmy, who is worried the loud sound could snap Judy out of her trance. She continues to dance obliviously as Timmy, Cosmo, and Wanda share a laugh. 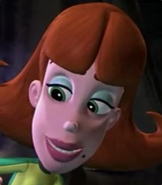 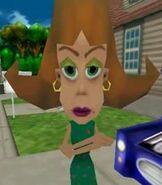 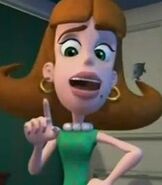 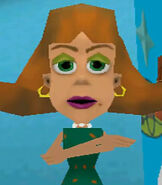 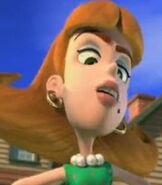