The Parody Wiki
Register
Don't have an account?
Sign In
Advertisement
in: Characters, Females, Students,
and 82 more

Juleka Couffaine is a student in Miss Bustier's class at Collège Françoise Dupont. In "Reflekta", after being locked in the bathroom by Sabrina Raincomprix (under the orders from Chloé Bourgeois) to prevent Juleka from participating in the class photo, she is infected with an akuma by Hawk Moth and becomes Reflekta, a supervillain who turns people into copies of herself.

In "Reflekdoll", after Juleka misses the chance to photo shoot for Marinette's design, she is once again akumatized by Hawk Moth into Reflekta. along with being amokized by Mayura, her emotions forming a doll-themed sentimonster which enhances her powers.

In "Félix", after being fooled by Félix to think that Adrien didn't appreciate his friends, she is re-akumatized into Reflekta, and, along with Princess Fragrance and Lady Wifi, the three supervillains form The Punishers Trio, a group of supervillains who want to get revenge on Adrien, later Félix.

In "Gang of Secrets", after Marinette keeps hiding secrets from them, Juleka is re-akumatized by Shadow Moth into Reflekta along with Lady Wifi, Princess Fragrance, Timebreaker and Horrificator, the five supervillains all form the Gang of Secrets, a group of supervillains who want to reveal Marinette's secrets.

In "Guiltrip", after Rose snaps to her friends about the overprotective way they are treating her and causes Juleka to feel guilty for being the one that caused that to happen after sharing her secret to everyone, she is later re-akumatized into Reflekta and amokized again by Shadow Moth, and her guilt form Guiltrip, a sentimonster.

As a ToolHero, her alter ego is Doctor Jewels (sorta like Doctor Timithy) who can use mind control and elemental powers.

Despite in Miraclues, her alter ego is Purple Tigress. 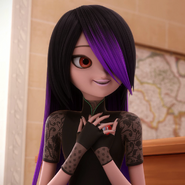 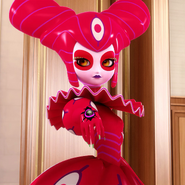