Julie the Flamingo is a guest who hails from the world's tropics and subtropics, and appears in the fifth third season episode of The Animal Show. She speaks in a proper British accent. She tells Stinky and Jake about flamingos and how they eat with their beaks. After the interview, she sings "Beaks" with Bunnie playing with spoons while backing her up. 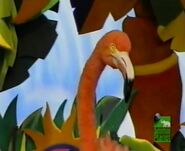 Add a photo to this gallery
Retrieved from "https://parody.fandom.com/wiki/Julie_the_Flamingo?oldid=1882985"
Community content is available under CC-BY-SA unless otherwise noted.